USB (Universal Serial Bus) is a serial bus standard to connect various devices to a host computer. It was developed to allow many peripherals to be connected to PC using one standardized interface socket. This standard allows devices to be connected and then disconnected without rebooting the computer or turning off the device. 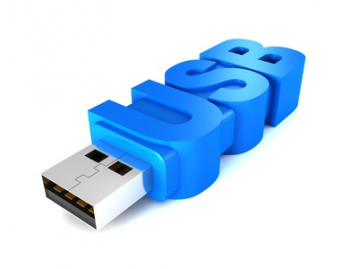 USB features such pleasant options as providing power to low-consumption devices; you can even charge certain cell phones. Also allows many devices to be used without manufacturer-specific device driver installation.


Some historical facts about USB

The USB 1.0 specification was introduced in 1996. It was developed to replace the numerousness of connectors at the PC's back and to simplify software configuration of communication devices.

The USB 2.0 specification was released in April 2000 and was standardized by the USB-IF at the end of 2001.

The USB 3.0 specification was released on November 12, 2008 by the USB 3.0 Promoter Group. It is up to 10 times faster than its predecessor specification.

Most of USB devices can be accessed from a remote PC as if they were connected locally to yours with the help of USB over Network software.

The primary reason for this limit is the maximum allowed round-trip delay. If USB host commands are unanswered by the USB device within the allowed time, the host considers the command lost. So in order to meet the USB specification, cable length should be not longer than 5 or 3 meters as described above.


The limitations one may face while using USB cable

In order to go beyond these limits you need to use USB hubs, USB active extension cables or USB over Network products.

There are class codes defined by USB in order to identify device's functionality and to load the needed driver. Thus devices from various manufacturers, that comply with a given class code, are supported by device driver writer.

Here are some examples of most popular USB devices

USB 3.0 (Superspeed USB) is a major revamp of the well-known and widely used Universal Serial Bus that was created in 1996. It seems that the speed we already got is never enough. Several hundred megabits were enough only for some time, now it seems not that much. USB 3.0 promises higher transfer rates (up to 4.8 Gbps), increased maximum bus power, new power management features, new connectors and cables for higher speed data transfer (they are backwards compatible with USB 2.0 devices and computers though).

Usually it may seem that USB 2.0 is quite enough, but with ever increasing demands because of terabyte storage devices, high megapixel count digital cameras, multi-gigabyte mobile devices 480 Mbps becomes not enough, while practically data transfer speed is about 320 Mbps. So the fact that USB 3.0 makes it about 10 times faster sounds incredible.


Some historical facts about USB 3.0:


Here are some examples of USB 3.0 devices:

You can share USB devices over network with the help of USB Network Gate by Electronic Team, Inc.
USB 3.0 support is added!